The O'Quirey brand launched in 2006 when Jan Palmen designed his first coloured brogues. A few years later there is different O’Quirey shoe for each day of the week and each occasion. In the Netherlands the shoes became particularly well-known when Johan Derksen, a Dutch sports personality started wearing them in his prime time television show.

All O'Quirey shoes are handcrafted in Europe, so all durable shoes with a good fit. O'Quirey has both men's and women's shoes. The latest creation by Jan Palmen for O'Quirey is the patchwork shoe. The upper leather is replaced by fabric while the interior is still fully made of leather. By using fabric for the upper, the possibilities are endless. Diamond, dots, stripes and prints: it’s all possible.

Jan Palmen
As a passionate sportsman and certified instructor, Jan Palmen entered the retail business as a store manager in at a sports apparel store in Groningen, the Netherlands. During this time his love of shoes became his passion.

His passion led Jan to establish his own athletic shoe and apparel store named COACH. Under his leadership, COACH expanded its business to 69 retail outlets located throughout the Netherlands and Germany. In 2000, Jan Palmen sold COACH and devoted his energy to the development of a premium retail concept focused on shoes and apparel.
FOSBURY opened its flagship store in 2001 at Assen and was elected "most beautiful store of the Netherlands" that same year. FOSBURY meets the needs of its customers for distinctive quality and style through its premium products for men and women. From its own design studio Jan Palmen develops exclusive shoe and apparel designs for his customers.

Goodyear Welted
Most O'Quirey shoes are crafted using the Goodyear welted method ensuring an optimal fit. This method ensures the superior quality of the innovative designs. It consists of an upstanding rib on the insole to which a flat strip of material called the welt is machine stitched along with the Upper. This is the hallmark of the Goodyear Welt, invented by Charles Goodyear jr. in 1874. The outside is machine stitched to the welt without stitching through the inside of the shoe.

The Goodyear welt is highly regarded for a number of reasons including being relatively waterproof by not allowing water to get into the insole due to the welt-sole construction, the relative ease in which the sole can be replaced, and the fact that the shoe can last up to 20 years or longer depending on the treatment and condition of the upper. 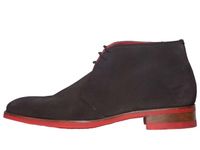 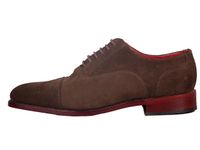 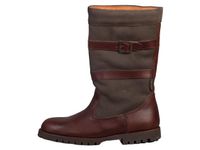